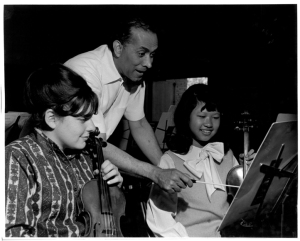 From The Los Angeles Times, Dec. 4, 1994
PERFORMING ARTS : Youthful Maestro Eyes 21st Century : Mehli Mehta, at 86, is preparing the way for a new music director of the L.A.-based youth orchestra he formed in 1964. But don’t count him out yet.

“Having reached 86, I think it is only prudent, practical and professional to start looking for a successor who will eventually take over the Music Directorship of the American Youth Symphony.”

Mehli Mehta is adamant. He is speaking loudly and rapidly, his sentences coming with exclamation points attached. He is making a declaration of faith. He has just been asked if he is going to retire from the American Youth Symphony, the young players’ training orchestra that he founded in 1964.

But, clearly, as the season announcement indicates, Mehta is covering all the bases. A series of guest conductor auditions is already in progress for the successor for the Los Angeles-based orchestra, and auditions will continue until 1997. So will Mehta retire then? “No, ’97 is my Brahms year. It’s his centenary. No, forgive my saying so, but you can’t put me on the spot like that. God willing, if I’m all right, then I’ll go on. If I’m not all right, if I feel that I cannot do my duties well, then I’ll say, ‘Well, all right, now you take over.’ ”

A small, thin and dapper gentleman, Mehta sits in a Westside home filled with musical mementos (a portrait of son Zubin is displayed prominently), his thoughts ranging over an entire life. He is practically bursting to tell his story and looks genuinely proud as a photographer snaps his picture.

Mehta was born Sept. 25, 1908, in Bombay to Parsi parents. He became interested in Western classical music at an early age when he heard recordings of violinists Kreisler, Heifetz, Zimbalist and Kubelik. At 5, he asked for and received his first violin and music lessons. Still in his teens, he began the Mehli Mehta Sextet (a salon orchestra that played in Bombay hotels); in his 20s, already India’s leading violinist–“in the kingdom of the blind,” says Mehta, “the one-eyed is king”–he founded the Bombay Symphony, borrowing wind and brass players from the local British Army band, and then, later, the Bombay String Quartet.

He taught, gave recitals. He was the pied piper of Western classical music in a land that didn’t know the tune. Muslims and Hindus refused to attend the Parsi’s concerts.

With dreams of becoming a world-famous violinist–having met Jascha Heifetz on the master’s visit to Bombay in 1932, and Yehudi Menuhin, when the latter appeared with the Bombay Symphony–Mehta came to the United States on a student visa in 1945 “to study the violin in the real sense of the word.”

For five years in New York he studied with famed pedagogue Ivan Galamian and attended concerts in Carnegie Hall five nights a week. He rattles off the names of the great violinists, pianists, conductors he heard there; and remembers his seat number, “A-2.” But eventually he had to return to Bombay, and after New York, life there seemed increasingly unsatisfactory. When, in 1954, sons Zubin and Zarin left to study in Vienna and London respectively, “life was unbearable for my wife and me,” says Mehta.

Unable to obtain a U.S. visa, Mehta headed to England and soon became a member, then the concertmaster of the Halle Orchestra under Sir John Barbirolli, a major influence on Mehta’s conducting. But, when the opportunity to come to the United States resurfaced five years later in 1959, in the form of the second violin position in Philadelphia’s Curtis String Quartet, he took it and has been in this country ever since.

Saturday morning rehearsal with the American Youth Symphony, Schoenberg Hall, UCLA. Mehta is completely in his element. One might think that the young musicians, ages 16 to 25, energize the older man, but it is most assuredly the other way around. Wearing his trademark white, long-sleeve smock, Mehta takes–exhorts–the orchestra through Shostakovich’s Fifth Symphony, peppering detailed instructions with anecdotes, admonitions and broad smiles. He repeats short commands like rifle shots, often shouting above the musical din–“Let’s get into it, let’s get into it.” “Sing! Sing!” To the cellos: “I don’t see the agony in your faces.” To the violins: “vibrate, vibrate.” To the snare drummer, trying to get him to play in the desired way, Mehta tells of the Nazis marching on Leningrad.

He mimics the conducting style of Fritz Reiner to make a point about watching the baton. He recalls the orderly British regimental parades in India to illustrate an idea on ensemble precision and quickly adds that the British kept the Indians from fighting each other but that “here is a Muslim and a Hindu on the same stand,” he says, pointing to his first two violists, “here is peace!” He addresses everyone as “dear”– “Please, I’m talking to you, dear”: this to a horn player with a goatee.

The orchestra obviously likes him, readily responding to his demands, attentive to his stories, laughing at his jokes. One musician helps the conductor by quietly feeding the measure numbers to him, so he doesn’t waste time searching the score he rarely looks at. Past break time, Mehta insists on continuing and answers the musicians’ protests with a sarcastic, “Yeah. So what. You’re not going to melt.” Nearing the end of the symphony he declares, “This is a magnificent coda. This is the coda that saved Shostakovich’s life.” As they play it, he is beaming.

If Mehta has any regrets it is that he took up conducting so late in life. By the time Jan Popper called him away from the Curtis Quartet to head the orchestra department at UCLA, he was 56. “Fifty-six is not old for a conductor,” explains Mehta, who also joined the American Youth Symphony at that time, “but it’s an old conductor for a career.” There have been a few moments in the big leagues–he has led the Philadelphia Orchestra on four occasions and the Israel Philharmonic–and his own orchestra has not lacked for acclaim.

Zubin comes up a lot in conversation. Mehta refers to him as “my wonderful boy” and “an angel,” and it is clear that they are very close. Last season, when Mehli was in the hospital with triple pneumonia, Zubin came to the rescue, conducting the Youth Symphony in Santa Barbara between his own engagements with the National Symphony and the Lyric Opera in Chicago. (He’ll be conducting the Los Angeles Philharmonic Friday through Dec. 18.)

He thinks much of the criticism directed at his son over the years has been undeserved, but he is calm and philosophical when discussing it. He defends Zubin’s involvement in the “Encore! The Three Tenors” mega-concert last summer at Dodger Stadium by explaining that his son initially refused but agreed in the end “just to please his colleagues.” Indeed, this is the only (mild) criticism father has for son: “He’s really doing too much, much too much . . . but he’s a wonderful boy who just can’t say no to anybody. He’s got that one vice.” Mehli quickly adds, however, that Zubin always “delivers.”

His own conducting has seemed to grow in stature in recent years, and Mehli seconds this opinion. “I conducted the ‘Fantastic’ Symphony a couple of Sundays ago (with the AYS), and it was much mellower, much better, much more settled than when I did it 10 years ago. . . . It has to improve, otherwise there’s no sense.

“I’m doing the Shostakovich Fifth next month and Shostakovich Fifth I did so many times. But today it’s totally different. One finds more pleasures in it, let’s say. I consider a score as a gold mine: As you go deeper you find more gold.”

His enjoyment level is “even higher, even higher” too.

“That is the whole thing,” he says. “The day when I stop enjoying making music, that’s the day when I must completely stop. That will never happen, no, no, never happen.” He calls his orchestra “my big family.” “I’m their grandfather. They all treat me very, very lovingly, and it’s a whole atmosphere of love.

“Did you know that 12 of my boys are sitting in the Los Angeles Philharmonic? Twelve! One of my girls who played the viola for me, she’s the principal viola in the New York Philharmonic, Cindy Phelps. . . . One of my first clarinetists is the assistant clarinetist in the Chicago Symphony, John Yeh. Wonderful, wonderful. So, we are very, very proud that way. My pride and joy is to put my boys and girls in beautiful places. That’s my life.”

* Mehli Mehta conducts the American Youth Symphony in Grieg’s Piano Concerto, with Kirill Gliadkovsky as soloist, and in Shostakovich’s Symphony No. 5, at the Wadsworth Theater. Next Sunday, 8 p.m. Free. (310) 476-2825.