New Giulini reissue on the way 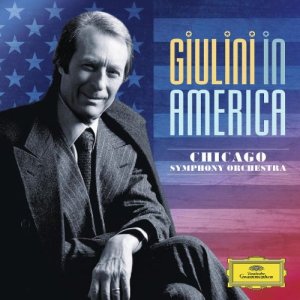 Deutsche Grammophon is finally getting around to releasing a boxed set of the recordings it made with Carlo Maria Giulini and the Chicago Symphony.  The 5-CD package with the lame cover (above) is a follow-up to a previous release the company made of the conductor’s recordings with the L.A. Philharmonic. It will be released on June 21 to an adoring public, which will no doubt utter a gigantic ‘huzzah’ and send it to the top of the bestseller lists.

But seriously, we’re all Giulini fans here. The track listings are not yet available online, but if DG includes the entirety of its recordings with the maestro and the Chicagoans the set will include.

2. Britten’s Serenade for Tenor, Horn and Strings (with Robert Tear and Dale Clevenger).

5. Mussorgsky’s “Pictures at an Exhibition”.

I’ve not heard all of these recordings. But those I have are choice. The Mahler 9 (a Grammy winner) in particular is fearsome, and belongs in every collection. Giulini, at least at this stage of his career (the 1970s), recorded only music he felt deeply about and in which he had something special to say.

By the way, the Chicago Symphony has a free podcast of Giulini recordings made with the orchestra, including pieces by Prokofiev, Stravinsky, Dvorak and Schubert. Click here.