Post No. 140, in which I become a Civil War reenactor

My wife and son managed to drag me to a Civil War reenactment Saturday. I had never been to one (neither had they) and I said to myself ‘Why the hell not?’ It might not beat lying around on the couch but at least I’d be with my family. The event was called ‘The Battle of Costa Mesa.’ It was quite the scene when we got there, both sides camping in the park in authentic fashion, with period tents and gear. Shortly after arriving, we came upon a group of Civil War musicians, parked in the shade of a tree. I approached them, curious to find out more. Bruce (above), the leader of the group, proudly showed me his French reproduction of a period bugle.

These guys are serious. This member of the band is showing me his brand new reproduction of a Civil War era rotary valve brass instrument. He paid a maker in the L.A. area thousands of dollars to make it for him. I’m holding a tenor horn, made by another member of the band. Both of these horns are held on the shoulder, with the bells pointed backwards. The regimental bands of the era, it was explained to me, marched in front of the troops, thus the direction of the bells. 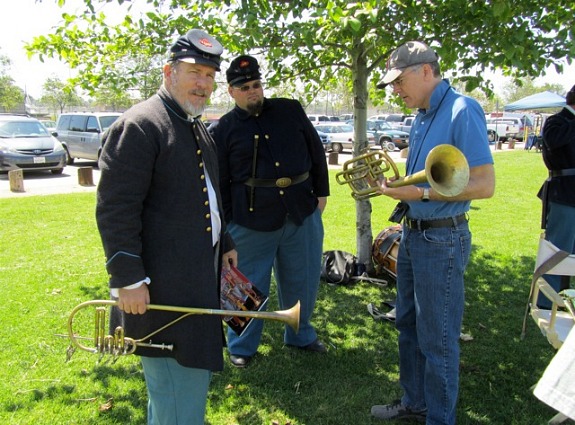 Here’s Bruce holding yet another one of his instruments, a kind of cornet played over the shoulder. It turns out that he heads the Armory Band in Riverside, a busy enterprise devoted to Civil War music. The fellow behind us, Nick, made the horn that I’m holding. 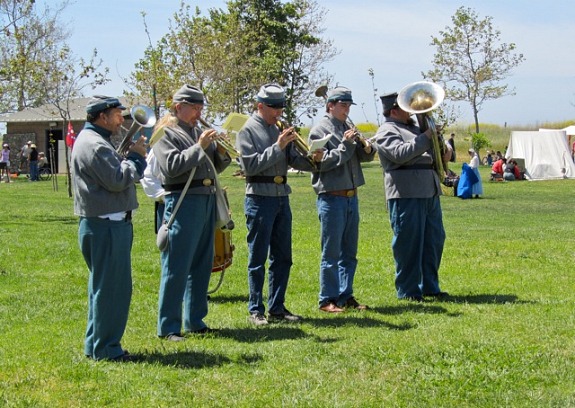 Well, wouldn’t you know. Bruce brought along some music as well as some extra uniforms and I was impressed into the band. The tenor horn I played is in the same key as a trombone, and I know the fingerings from my student days playing euphonium and tuba. The Confederate troops were mustering and we were asked to play for them. (My great great grandfather was a Yankee in the Wisconsin infantry who died in the notorious rebel prison at Andersonville. I hope he forgives me.) We played “The Bonnie Blue Flag,” over and over. I think this makes my stature as a nerd official, but I have to admit it was a blast,  and all the better for being truly spontaneous.

Below, some original sheet music for “The Bonnie Blue Flag,” published in 1861. Click on the photo for large view.

Update: Below is a photo of my great-great-grandfather, James Mangan. He fought in the 24th Wisconsin Infantry during the Civil War. His commanding officer was Arthur MacArthur, father of Douglas MacArthur.