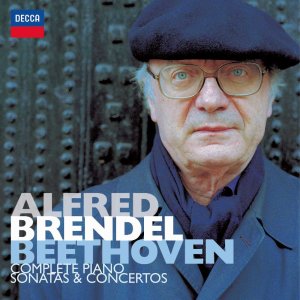 Perhaps the most surprising thing about Alfred Brendel when you reach him on the phone is that the man, in person or at least in voice, is so jovial.

Little about his public image would lead you to believe this. Not the way he hunkers down over a piano, or the way he acknowledges applause, as if in slight distaste.

Not the way he will glare at a misbehaving audience member (he’s been known to stop playing to do so).

Not the thick, horned-rimmed glasses and mad scientist hair, or the quizzical, sometimes pained expressions he wears in photos.

Not the crisply magisterial essays he writes for publications such as The New York Review of Books and collects in books such as “Musical Thoughts and Afterthoughts,” and “Music Sounded Out.”

And definitely not his musical interpretations themselves, which seem to dispense with all extraneous nonsense (such as rubato) in their search for the true heart of a work.

But Brendel, 71, speaking from his London home, is a chuckler. It’s not that he cracks jokes, though he does possess a certain dry wit. It’s that he takes a kind of ironic delight in things, even — when he drops a cup of tea — in his own ineptitude, it seems.

For those who can’t meet him, Brendel’s personality may be most clearly revealed in his whimsical poetry, a relatively newfound vocation. In “One Finger Too Many,” his first collection in English with more on the way (there are three volumes in German and translations either existing or on the way in French, Italian and Dutch), Brendel toys with surreal fantasies, envisioning Buddha as a sumo wrestler in one poem, imagining himself as Othello to Helena Bonham Carter’s Desdemona and John Malkovich’s Iago in another, or picturing The Three Tenors enwrapped in Christo’s sackcloth or riffing on the time he was mistaken for Woody Allen.

In the Gogolesque title poem, a pianist grows a third index finger which “exposes an obstinate cougher in the hall” and emerges from beneath his coat “beckoning a lady in the third row.” The finger, in another moment, protrudes from his collar, “indicating the theme in retrograde.”

“These are things that come to me like in a dream,” Brendel explains. “Or, if I may call it, in a hypnogogic state, in a state between waking and sleeping.” On a plane to Japan several years ago, he found himself groggily awake and the finger poem “just emerged.”

“It was not intentional, it was accidental, and all the more delightful for that.” The pianist finds his new talent especially welcome when on tour. It can take weeks to adjust to the time table, he says. “And this is an advantage for, well, poets.”

Brendel the pianist has long focused on the main line of Austro- Germanic composers, from Mozart to Schoenberg, with, perhaps surprisingly, Liszt thrown in. He has made multiple recordings of much of this repertoire, including four complete cycles of the Beethoven concertos. He made the first complete recording of Beethoven’s piano works in the late ’50s and early ’60s; those inexpensive Vox Boxes spread his fame internationally.

When asked what brings him back to these same composers time and again, Brendel replies laconically: “The quality. It’s very easy.” He chuckles and then expands. “You see, I am not at all partial to a certain part of the world, or nationalistic, or feeling particularly Austrian, nothing of that kind. I am just looking for great music with which I can live and which rejuvenates you when you come back to it.”

So why not Chopin then? “Well, you see, I am not a specialist in my repertory, but I specialize in not playing Chopin. And that has a particular reason. I greatly admire Chopin, and I think works like his 24 Preludes are among the greatest achievements of piano literature. Also the Etudes.

“But when I was young there were two types of the great pianists. One that predominantly played central European repertory and the other one, the Chopin player with some composers around, adjacent composers.” There weren’t many pianists who played both repertories, Brendel says, because they called for different techniques. “(Chopin) calls for a very particular style which would be harmful to other composers. If you read Liszt’s description of Chopin’s playing you will see what I mean.”

Brendel’s essays, which probe into a particular work or composer, are written for the musician or sophisticated listener, he says. Additionally, “what I am trying to do is to write about music without writing nonsense. … But I mean I am also thinking about literate people. It’s the pleasure of writing and of being concise and of being elegant and of trying to say something with each sentence.”

A similar aesthetic informs his piano playing. “I certainly try to avoid unnecessary complication. At the same time I try to be as sensitive as possible. There is something like sophisticated simplicity, and the great master of this was (pianist) Edwin Fischer” — whom Brendel tutored with — “in his best playing. … But I do not want to have any recipe for my playing. I just want to react to each piece and each phrase.”

He reacts to audiences, too, particularly if they are noisy. “This is sometimes the case, unfortunately, in California, because there is more coughing there than anywhere else in the world. Oh, my goodness, not only coughing but also sneezing. Part of the reason would be the air conditioning systems, I would feel. But even so, people are not disciplined, they do not realize that they disturb the performance. It seems to them that they are sitting in front of a television set where something comes out in one direction but nothing goes back in the other direction.”

Brendel’s playing has changed over the decades; some listeners find more warmth in it these days. We asked him to characterize the change. “Freer, yet more accurate. Sorry to hand you a paradox, but there you are. What I was aiming for is that the pieces should tell me what to do. And it needs a great deal of patience sometimes to get there, if one gets there at all.”

Neck and back problems in the last few years have forced him to drop some of the more strenuous pieces — Beethoven’s “Hammerklavier” Sonata, the Brahms concertos — from his active play list. “Well, I’m fine (now),” Brendel says. “The fact that I have trimmed my repertoire has done me a lot of good.”

He’s not slowing down, particularly. His tour makes 13 stops, including Carnegie Hall, in less than a month. After a few days off, concerts will continue from the end of May until the end of June, when he’ll sit down for studio sessions. He’s recording the complete works for solo piano by Mozart. “I am attempting to do it without rushing it, without pressure,” he says.

A new book of conversations — “about music, literature, and myself” — will appear in English in the fall. Another selection of poetry in English is in the works. Next year, he plans a recital tour with his cellist son.

All of which leaves us wondering what drives him.

“Well, I don’t think I’m really driven. I’m not a fanatic, I dread fanatics. Fanaticism is something that frightens me. So I have given myself the appearance, or the idea, that I do what I do out of my own free will.” And he chuckles at the sound of it.