I see that it has been a year since I have mentioned the topic of summer reading, specifically mine.

Last time, I said something or other about the classification seeming rather nonsensical to me, since I don’t read any differently in the summer than I do in other seasons, and I doubt that most readers do. At any rate, here are some thoughts on what I’ve been reading since the weather got warm.

“Charles Jessold, Considered as a Murderer” by Wesley Stace is an astonishingly learned and lively novel set in the world of classical music. 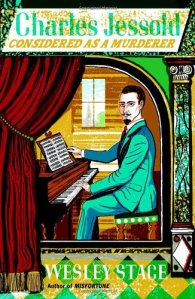 The narrator is a music critic! Jessold is a hugely talented English composer of the early 20th century whose life runs, or seems to run, parallel with that of the great Renaissance composer and murderer Carlo Gesualdo (note the similarity in names). Stace’s scholarship in this novel is very impressive (check out his acknowledgments at the end). It turns out that Stace is merely the pen name for musician John Wesley Harding. His novelistic style reminds me most of Julian Barnes. There are plenty of plot twists in this book.

Speaking of music critics, I also read (before the summer solstice, full disclosure) volume three of “Music in London,” which collects the weekly reviews of Bernard Shaw in the early 1890s. Holy crap this guy could write! One suspects that many of his judgments are off and that, indeed, he’s making up stuff, but it really doesn’t matter at this date. I’ve read plenty of Shaw’s music criticism before — including “The Perfect Wagnerite,” the best introduction to the “Ring” cycle that I know of — but selections do him no justice. To read his weekly columns in full, laid end to end in chronological order, is to be awestruck as well as laugh-out-loud entertained.

Mostly, though, I’ve been continuing my barrage into the novels of William Dean Howells. Very few people these days have ever heard of Howells, a contemporary and friend of Mark Twain and Henry James, and considered their equal back in the day. I love his particular brand of realism, mostly for my own reasons, I suppose, so I don’t necessarily recommend him to anyone and everyone. But he was a great, great American novelist. The place to start, if you are curious, is probably with his most famous book, “The Rise of Silas Lapham,” which is terrific, but Howells wrote prolifically and well. Since the Ojai Festival (where I nabbed an old paperback of two of his novellas in Bart’s Books), I have concentrated on his fiction from the 1890s (his maturity), including “An Imperative Duty,” “The Shadow of a Dream,” “The Quality of Mercy” and “The Story of a Play.” I was fascinated with every one. I also read his charming memoir of life in Ohio in the 1840s, “A Boy’s Town.”

Part of the fun with Howells, by the way, is finding his stuff. It isn’t easy, but it can be done. (I’ve even found and bought some first editions of his online for cheap.) It adds to the sense of discovery I feel reading his work.