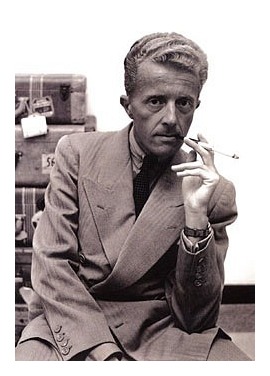 I’ll be making a rare public appearance before the legions of my adoring fans this weekend as part of the Bowles at 100 festival at the University of California, Santa Cruz. (Schedule here.) I’ll take part in a panel Saturday morning with the Guatemalan writer Rodrigo Rey Rosa and the ethnomusicologist Philip Schuyler. My lecture, naturally, is titled “Paul Bowles as Music Critic,” and it’s largely based, also naturally, on my book.

In addition to the conference talks and lectures, there will be concerts featuring Bowles’ own distinguished music and an exhibition of images and artifacts from his career.

If you happen to be in Santa Cruz over the weekend, stop on by. Mention this blog and you’ll receive a completely dumbfounded look and a free handshake.

“The piece itself is couched in an unamusing, degenerate style whose sole point seems to be that of keeping the textures every moment at the highest possible degree of richness. Unfortunately that richness palls almost immediately, as greasiness does in cooking.” — Paul Bowles on Rachmaninoff’s Piano Concerto No. 2.